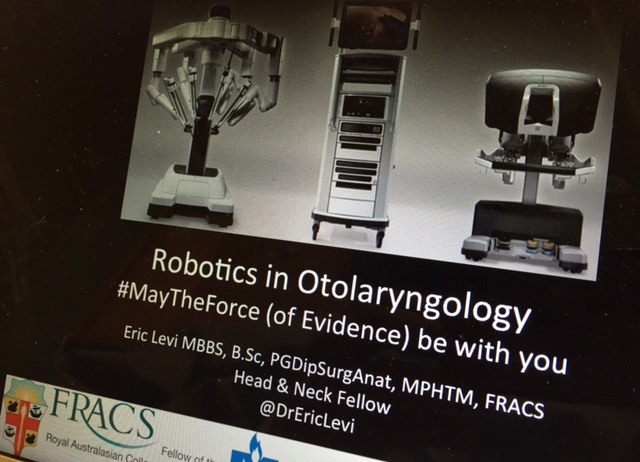 This presentation was given at my Division of Otolaryngology Head & Neck Surgery Grand Round. These are my key introduction and summary points for your enjoyment with a whole section of papers and data excluded. These are my opinions and not those of any persons or organisations I may be associated with. This blogpost is not a scientific or commercial presentation.

Please, relax. Many would understandably approach this topic with a set of preconceived ideas about the surgical robot. Disclosures: I am not a robot or a robotic surgeon. I do not own a robot or any shares in any robotic company. I am not a proponent or an opponent of robotic use in surgery. I am not selling any robot or any robotic ideas. I am a Head & Neck Surgeon trained in the conventional open surgical approach and the Transoral Laser Microsurgery techniques. I have attended a TORS seminar and seen the robotic operations performed several times in Australia.

Why explore robotics? Because of these three reasons:

It is said that all truth passes through three stages. First, it is ridiculed. Second, it is violently opposed. Third, it is accepted as being self-evident (Arthur Schopenhauer). We have seen these waves of resistance historically in medicine: handwashing, H.pylori, EBV & HPV oncogenic virus. And specifically the challenges faced by previous generations of ENT surgeons in laser surgery, bionic ear, endoscopic sinus surgery, endoscopic ear surgery, etc.

Brief history of Robotics: 1921 – Czech playwright, Karel Capek, first coined the term robot, based on the Czech word “robota” for slave or serf, in his play, Rossum’s Universal Robots. His brother Joseph Capek wrote the short story “Opilec,” in which “automats” were described. 1940s – Isaac Asimov wrote multiple short stories on Robots in society. Major key difference is that surgical robots are passive tools that require surgeons to drive them. Surgical robots do not operate on their own. They are extensions of the surgeon’s eyes and hands.

Where’s the robot today in surgery? 85% of radical prostatectomy in the U.S. is performed with the robot. Biggest users are those with difficult access regions: Urology, Gynaecology, Cardiothoracic, while ENT is relatively new and late to the game. Here in ENT, the Robot rides 3 ENT epidemics: HPV positive oropharyngeal SCC, thyroid cancer and OSA.

Big Questions: Is it safe? Is it surgically efficient? Is it oncologically effective? Is it useful? Is it user-friendly? Is it cost-effective? Is it better? In comparing techniques, are we comparing apples with oranges? Open vs TORS, RTx vs TORS, TLM vs TORS, RTx vs Open vs TLM vs TORS, CRTx vs Open vs TLM vs TORS. Without data, you’ve only got an opinion. Entering “Transoral Laser Microsurgery” in Medline Search term from 1964 brings up 193 papers, while “Transoral Robotic Surgery” has 337 papers associated with that term. There is a lot of data already out there with regards to the use of TORS.

Current ENT Robot use in U.S.

Is it surgically efficient?

Is it oncologically sound?

Is the robot better for the surgeon?

Is the robot better for the public purse?

Is the robot better for the patient?

Keep innovating for the sake of our patients.